Most business school courses encourage student participation by incorporating it as some component of your overall course grade.  Because some companies will look at your fall quarter academic performance, this can definitely have an effect on your overall recruiting efforts. 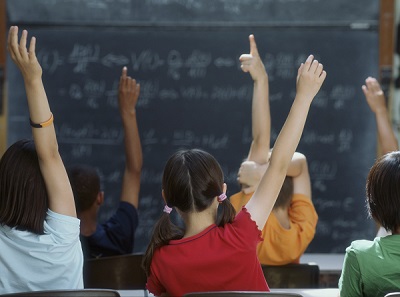 The problem with being graded on participation is that it can be ambiguous, unfair, and difficult to measure.  While some professors will actually enlist a TA to jot down everyone’s participation, most professors simply go off of memory.  You’ll also have instances where one or two students hog all of the air time within class.  Some students simply repeat what other students have said, either because they have nothing else to say or because they weren’t paying attention.

Being a person of Asian descent, class participation was always somewhat difficult for me.  My natural inclination has been to sit back and let the professor lecture.  Confucian principles emphasize showing respect for the teacher and for many people this can lead to not speaking up in class.

Despite my own cultural tendencies, I knew class participation was important, both for my grades and for experiential learning.  Below are the tactics I used to improve myself in this area.

Sit Near the Front of the Class

One of the biggest detractors to participation is the judgment of your peers.  Within a given business school classroom, there’ll be at least a few people who love to use airtime to dismantle someone else’s argument and relish disagreeing with their classmates.  (Unfortunately, business schools inherently attract these personalities)  Because most people are conflict averse, this discourages students from participating at all.

I’ve found that one of the best ways to relieve this pressure is to sit near the front of the class.  By doing so, you think less about the possible critiques from your peers and your participation feels more like a conversation with the professor.  Obviously your comment may still get ripped apart.  But this approach pushes you past the threshold of not participating at all and thus will ultimately help your grade.

Not every comment you make has to answer a question or make an assertion.  Sometimes the best participation comes from students who question something fundamental about the case.  Just make sure what you’re asking isn’t something already included in the preparation material.  I personally feel the best questions are the ones that can relate a dated case to something that has occurred in more recent history.

Take the Contrarian Point of View

When deciding between two courses of action, the opinion of an entire classroom is rarely split right down the middle.  There’s almost always both a majority and a minority opinion.  Similar to the advice mentioned in the case preparation post, this is where taking the contrarian point of view can really help you.  When both sides get presented in the class discussion, those in the minority will undoubtedly get more air time on a per person basis.  You don’t necessarily have to agree with the side you are taking – as long as you can make a good argument for it, your comments will add to the discussion.

One of the most annoying things about class participation is having the right answer to a question but not being able to vocalize it because someone else got their hand up before you did.  It’s not a surprise that this happens most frequently with easy questions.  The best way to get around this is to not go for the obvious answers where everyone else has something to say.

Over the course of a case discussion, the professor will occasionally ask a tough question that makes the entire classroom silent.  With no one else’s hand raised, getting called on shouldn’t be a problem.  However, these questions will obviously be more difficult and you’re more likely to be flat out wrong.  In these situations, you really can’t succeed without taking a risk.  Regardless of your answer, you’ll still get participation credit and if you happen to answer correctly, your contribution is more likely to be remembered.

Write Down Your Talking Points Before Class

The majority of people prepare cases just by reading the material; they don’t actually perform any synthesis or analysis of the case.  While it’s possible to do this during the case discussion, those who have done so beforehand are the ones who will be participating the most in class.

After reading the case, you should invest just a little extra time to create talking points for the discussion.  You should try your best to predict what the professor will ask and come up with answers for those questions.  The difference between being called on over one of your classmates will be just a matter of seconds.  Therefore, taking the time to formulate your ideas beforehand will definitely get you more air time.

As mentioned before, it’s easier to participate in class when no one else has their hand raised.  At the beginning of class, you’ll have stragglers walking in, people shuffling through their notes, and the majority of students waiting for the flow of the conversation to begin before raising their hands.  Therefore, you should make it a point to come to class early and be ready for the first question that comes from the professor.  The initial prompt is usually just summary of the assigned cases or readings, so being the first to raise your hand is an easy way to get participation credit.

Talk to the Professor After Class

If you legitimately have a question or point of clarification to resolve with the professor, and you weren’t able to make the comment during class, talking to the professor afterwards is a legitimate way to prove your knowledge of the material.  If you have a solid point, the professor is more likely to remember you when he or she is issuing grades.  Now obviously, this approach can easily be used unethically, as some students just approach the professor after class to suck up.  Therefore, don’t instigate the ire of your peers who have genuine questions; only use this tactic if you actually have something to add.

Use the Biases of Primacy and Recency

Persuasion studies have shown that, on the basis of order alone, people tend to have a better memory of both the first and last things you’ve said.  These primacy and recency biases have a similar effect if a professor is just using memory to assess student participation.  If you’re always the one of the first people to raise your hand in class, or someone who is good at making comprehensive points toward the end of the discussion, the professor is much more likely to remember you.  The two previously mentioned tactics will also help with this approach.

Use the No Nametag Trick