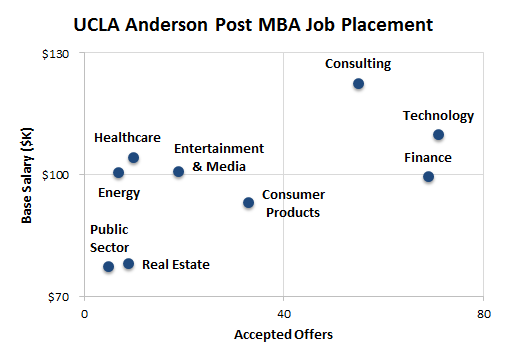 The following aggregated salary data has been pulled for UCLA Anderson’s Class of 2012 from REIS, or the Recruiting and Employment Insights System.  REIS is basically a “salary transparency” service created by an Anderson alumni to empower MBA students during the offer negotiations process.  You can’t look up any one person’s individual salary, but you can look at consolidated views for your own school by industry, function, and company.  REIS used to be called SalaryView, and I assume they had to change the name for legal reasons (because the name REIS is much worse). 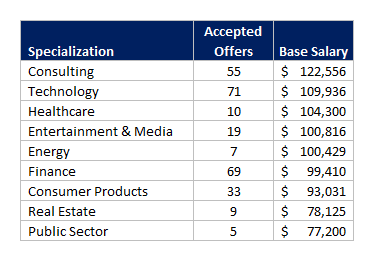 Looking at the data, you can see that there does appear to be some correlation between the amount of salary offered and how many students end up working for a particular specialization.  This would imply that students in our MBA program are generally recruiting for higher paying jobs.  Real Estate and Public Sector jobs are predictably at the bottom of the scale while Consulting and Technology positions offer the highest base salary.  One interesting data point is Entertainment & Media, which shows a relatively high base salary for given the stories about how difficult it is to recruit for this industry, but many different types of positions can be grouped in this category.

However, there are a number of issues with the data to consider before making any conclusions:

I’ll run this analysis again for the Class of 2013 and hopefully the data will improve in that iteration.  One key thing missing from this data is how hard it was to get a particular job.  Essentially, the job offers as a percentage of the overall interest level.  While this will be impossible to calculate definitively, I may be able to find a good proxy.