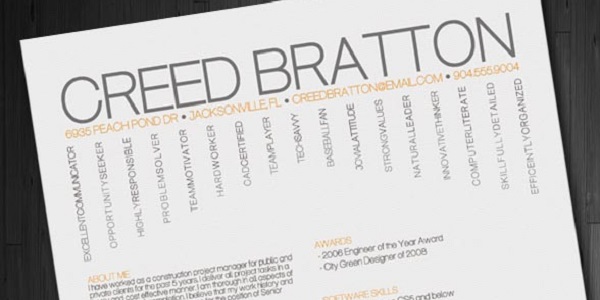 Your resume is probably the most important document you will create during your two years in business school.  When I started my MBA, I actually thought my resume was in great shape.  But my initial review with a career counselor proved otherwise and made evident the time I needed to spend on this process.

During fall quarter, I did a full restructuring of my resume and invested several hours to make the document perfect.  On paper, I was doing something right; I received interview requests for the majority of job positions I applied to.  I can safely say that my “resume redesign” was one of the best things I got out of business school.

For my second year in business school, I decided to become an Anderson Career Coach (essentially a second year that helps first years with recruiting) and reviewed several resumes from my MBA colleagues.  The following recommendations are derived from that experience and represent my point of view on how to build a good resume.

Have at Least One Leadership Position

With the intense level of competition during the MBA recruiting process, your resume will seem lacking without some sort of leadership position.  Therefore, when school starts, make sure you get at least one leadership position within a student club.  It may require sucking up to some of your second year colleagues, but the benefit it provides to your resume is well worth it.

Leadership positions within a business school can range from being just a formal title you put on your resume to a commitment of several hours of work every week.  Recruiters will rarely invest the time to learn the difference; the only thing they notice is whether or not you have a student leadership title listed.  Companies want to hire you on an upswing.  They want to see that you’re still motivated to work hard and take on extracurricular activities even after you’ve made the transition to becoming a student.

Prioritize the First Bullets of Each Section

MBA recruiters will be scanning hundreds of resumes before they decide who to hire into their respective firms.  With the sheer critical mass of resumes, you simply can’t expect these reviewers to read through your entire resume.  Additionally, the vast majority of application rejections happen early on in the review process.  Therefore, if you have some great accomplishment that doesn’t stand out on your resume, you run the risk of being dropped from recruiting early on.

Make sure the first two bullet points of each job title you have are your best bullet points.  When reviewing resumes during my second year, it was surprising to me how many people put great bullets either in the middle or bottom of their section.  Take the time to get feedback from others and find out which bullets are the most impressive.  Then prioritize these bullets so that they will stand out during a recruiter’s quick scan.

Don’t Leave Too Much White Space

If you’re applying for a position in a competitive field such as consulting or investment banking, you really need to consider the competition you’re up against for getting interview spots.  These aren’t people who have trouble filling up a page; more likely these people actually have trouble fitting everything on just one page.  The people who have a shot at getting these jobs will have done a lot of great things in their careers and have to triage their resumes to decide which bullets to keep.

One of the most common mistakes I’ve seen is the hanging, unfinished bullet.  This happens when you extend a bullet point beyond the first line, but only using one or two words on that next line, leaving the rest as white space.  In the eyes of a recruiter, the fact that you chose not to be more succinct in that first line to save yourself an additional line of text could imply that you are either lazy, sloppy, or that you just don’t have anything better to put on your resume.

Overall, you should think of your resume as a work of art.  These are the type of resumes that get interview requests.  If you can’t spend the time to bring your resume up to these standards, don’t expect a recruiter to spend much time reviewing it.

If Your GMAT Score is 700 or Above, Put it On Your Resume

The appropriate score for listing your GMAT results on your resume is something that people still debate.  The majority of top schools have GMAT averages that are above 700, so listing a 700 score won’t impress most recruiters.  For this reason a lot of career advisors recommend only disclosing it if it’s a 720 or higher.

However, I personally recommend listing any 700+ score because it prevents the perception that you didn’t list your GMAT results because you had a terrible score.  Listing a 700 GMAT is no longer impressive, but it doesn’t take up much space in your education section.  List it to prove you didn’t bomb the GMAT and use other sections to differentiate your resume.

Show Results in Your Bullet Points

The Situation-Action-Result framework for creating resume bullet points is fairly well known, but many people still don’t follow through with.  While most people are good at describing the situation and action, they neglect to convey any meaningful result.  The main cause of this is that many activities don’t actually lead to tangible results.  Most people entering business school don’t necessarily have a grand, sweeping result, such as reducing company expenses by 20% or increasing revenue opportunities by millions of dollars.  Sometimes analysis is done just because your manager wants you to spin your wheels so he or she can focus on more important things.

It takes additional time, but even for the mundane tasks you were assigned, you should think about the ultimate conclusion of your work.  Maybe you presented your work to a high ranking executive or were able to train your fellow colleagues.  You don’t necessarily need to list a result for every bullet point on your resume.  But make sure to have at least a few results you can talk to.  Results act as a validation point for the quality of your work and make them stand out to recruiters.