Whether you’re building a model or trying to simulate a scenario within your analysis, at some point in your Excel career, you’re going to need to use a randomized set of data.  If you need to create a purely random set of numbers, with no specific constraints or parameters, you can just use the RAND function in Excel to generate those numbers for you.

While Excel’s random number generating formula will help you some situations, there are many analysis and simulation cases where it simply won’t be realistic.  For example, let’s say that I wanted to simulate the test scores for a group of students on an exam and I know from past history that the average score is a 80.  The lowest possible score is 0 and the highest possible score is 100.

While I want a randomized result, I know that the test scores are not going to be uniformly distributed between 0 and 100.  However, if we used Excel’s basic RAND formula without any adjustments, that is the output that Excel would create for us.

Before we go further, please note that this is an Excel blog and not a statistics blog.  Therefore, I’m not going to spend much time on statistical proofs or mentioning famous mathematicians.  I’ll try to keep it as simple as possible and focus on Excel execution.

The normal distribution, also commonly referred to as a bell curve, is based on the assumption that a distribution of values generally cluster around an average.  Within the distribution, very high and very low values are still possible, but are less frequent than the ones closer to the average.

In nature, we know that this type of clustering occurs, as on the aforementioned test example, as generally a lot of people will score near the average, and generally fewer people will have very high and very low scores. 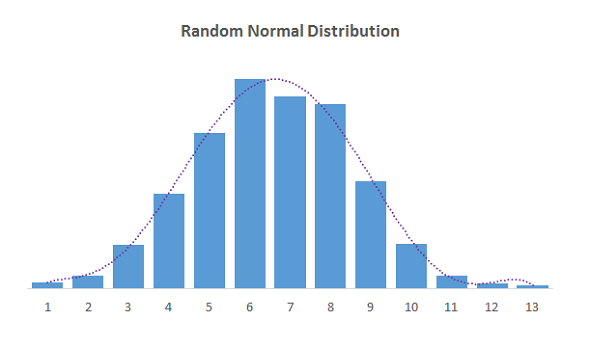 The two key parameters you need to know about the normal distribution / bell curve are:

Let’s go through the inputs to explain how it works:

Based on the syntax, what Excel creates a normally distributed set of data based on the mean and standard deviation you provided.  The probability input of the syntax is what determines the actual data value that is returned.  For the probability input, Excel is expecting a number between 0 and 1 which is exactly what the RAND provides.

To summarize, what Excel does is take the value from our RAND function, which by itself provides a random set of numbers uniformly distributed between 0 and 1, and forces it to instead to create a normally distributed set of numbers based on a mean and standard deviation we provide.

We’ve gone through the theory, so let’s go through the test example we’ve referenced to put the NORMINV formula into practice:

Step 1:  Determine how many numbers you’ll need in your sample

For our example, we’ll assume we only need 15 values.

Step 2:  Input the mean and standard deviation you want

You can put these directly in the formula, but generally it’s better to have them in a separate cell, as it makes it easier to do mass updates to large sets of random numbers.

Using our previous example, we’ll assume that the average of our sample should be 80 and the standard deviation should be 10. 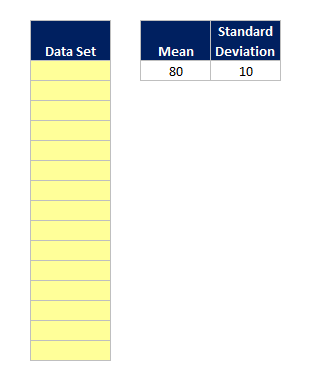 Step 3:  Write the Normal Inverse Formula using the RAND formula and referencing the mean and standard deviation you documented

For the NORMINV function, your parameter inputs should be: 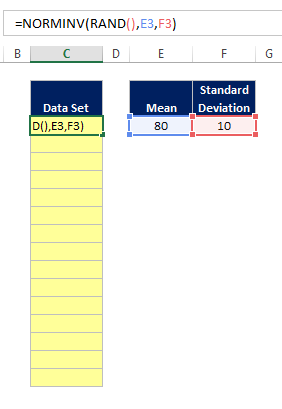 This is a very important step, as generally, you’ll want to use this formula for multiple cells.  You can do this by clicking into the cell reference within the formula and hitting the F4 key. 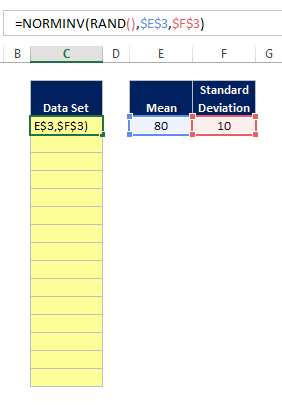 Step 5:  Copy your formula down

You can do this by double clicking the lower right hand corner of the cell. 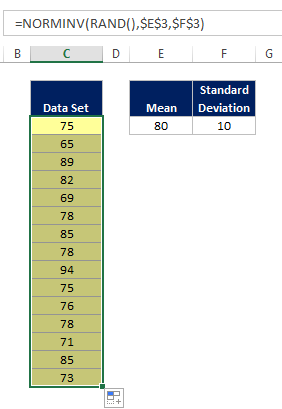 Now that you’ve created your random number set, you probably don’t want it to change every time you update a cell.  Therefore, go ahead and copy your data set values, and perform a Paste Special ( ALT  →  E  →  S  →  V ) to hard code the values.

You now have a normally distributed set of random numbers, based on a defined mean and standard deviation.

We’ve gone through the process of creating a random normal distribution of numbers manually.  But I’ve also built a simple Excel template that will help make this process a lot easier.

All you need to do is download the file and input the following parameters:

The template uses the same formula described above, but also has a separate formula that delimits minimums and maximums.  (Unfortunately, NORMINV does not have any parameters within its syntax to let you set a minimum or maximum return value)

Once you’ve set your values, one of the key features of the template is providing you a quick of the distribution of the random data you’ve created.  This is done with the “Count” cells to the right, which are conditionally formatted with data bars.  This basically provides you a histogram on its side.  I didn’t want to go through the trouble of creating a graph because this is supposed to be a flexible, quick and dirty view of your data.  It would defeat the purpose if you had to mess around with chart formatting as you were playing with your inputs. 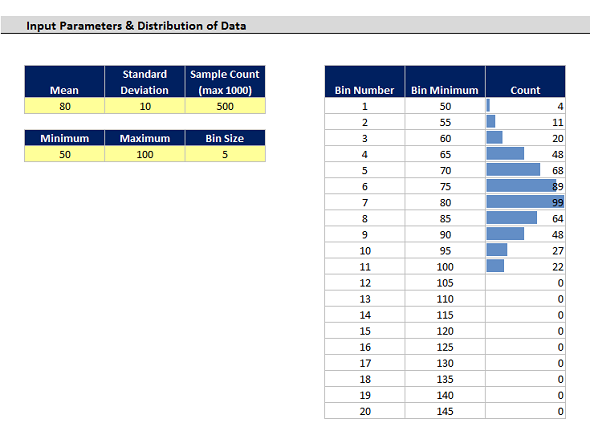