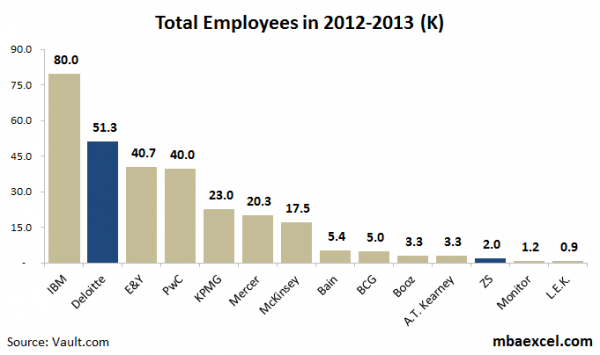 When people think about consulting as a career and are deciding between which firms to pursue, they typically prioritize a consulting firm’s brand.  Similar to the process of applying to business school, candidates want a company that will look great on their resume and support their careers long term.  While brand is obviously an important factor, one thing people rarely look at is firm size.

The graph above shows the different sizes of consulting firms with an active recruiting presence at UCLA Anderson, based on number of employees.  All values were sourced for the 2012-2013 timeframe from the free edition of Vault.com with the exception of IBM’s number, which I pulled from the company’s website.  The figures for the Big 4 firms exclude audit and represent their consulting divisions only.  Administrative support staff (people who work at these firms but do not perform client service) are also included these numbers.  One fun fact: Accenture, who does not have a strong presence at UCLA, employs over 236,000 people.

Before coming to business school, I spent three years in the Strategy & Operations group of Deloitte Consulting.  More recently this summer, I worked for three months at ZS Associates for my MBA internship.  For the most part, I had some sense of which firms were big and which firms were small, but I had never taken the time to look up the actual figures.  It was only after completing the second of these two experiences, which represent both ends of the spectrum, that I decided to do the research.

The biggest difference that stood out to me when joining a smaller firm was the improved consistency of talent.

Overall, the experiences of working at Deloitte and ZS had many similarities.  The majority of things I loved and hated about being a consultant were still there.  However, when you’ve done consulting for several years and move to a new firm, it’s easy to notice everything that’s different.  The biggest difference that stood out to me when joining a smaller firm was the improved consistency of talent.  While both firms clearly had talented and “not-so-talented” employees, Deloitte’s employee pool exhibited a wider range in terms of quality.

During my tenure at Deloitte, I worked with several colleagues that blew me away with their aptitude and they helped me tremendously in developing my career.  But there were also a number of people I met who had no business being in consulting (i.e. a consultant who stopped showing up to work until he got fired or the analyst who came to work drunk).  The fact is, despite having a very stringent and thorough recruiting process, a wide range of talent existed within the firm.  Partners at Deloitte understood this and would fight to keep their personal favorites working on their own projects.  This is why so many people complained about the staffing process at Deloitte; so much of your success was dependent on how much the partners liked you.  It was as if you had to go through recruiting all over again.

At ZS, the culture and behavior around staffing was noticeably different.  Partners were generally happy with whoever they staffed on their projects even though they had to pull from a much smaller resource pool.  The partners didn’t play favorites between the consultants.  Additionally, the talent and skill level of every consultant I worked with was very strong and consistent.  I never had to stop and explain a basic Excel formula or PowerPoint function, something I did frequently at Deloitte.  The analysts and consultants at ZS were also generally knowledgeable about our industry and service area.

Seeing this difference between the firms was initially counterintuitive to me.  I knew that to some degree, all consulting firms had a range of talent; I just assumed that larger firms with more resources and more recognizable brands would have better success promoting talent throughout the organization.  My experience working at ZS was a great opportunity to step out of the Big 4 mindset and see how another consulting firm was run.  After gaining perspective on the consulting industry as a whole, I would attribute ZS’s advantage to three key aspects of firm:

At a smaller firm, it’s much easier to drive consistent culture and behavior.  One of the simplest examples of this is the PowerPoint template.  I started at Deloitte when the company began rolling out a template several years ago.  When it first came out, most of the people at the firm hated it and many people, including partners with standing, refused to implement it.  By the time I left Deloitte, the majority of projects I worked on still did not utilize it.

I assumed this state of affairs to be the norm until I joined ZS.  At ZS, everyone uses the same PowerPoint template, regardless of whether it’s an internal or external presentation. Now personally, I do have issues with certain components of the template itself, but the fact that the firm has achieved such a high adoption rate is both impressive and strategically important.  Whether you’re looking at a deliverable from the Los Angeles or Boston office, both will represent the ZS brand.  The PowerPoint template is an example of how, at a smaller firm with fewer partners, it’s much easier to drive both firm initiatives and culture.

Additionally, the nature of the culture being driven is also critically important.  Unlike most large consulting firms, ZS really doesn’t have an up or out culture.  Your success at the firm doesn’t have to come at the expense of your peers.  Without the competitive environment, I definitely noticed a stronger sense of camaraderie.  During my internship, there were several occasions where my colleagues went well out of their way to assist me.  People in general were much more willing to help their fellow consultants who, in the context of a larger firm, would’ve been their competition.  And because the consultants are collaborating rather than competing, everyone receives a greater benefit from the collective knowledge of the firm.

The vast majority of ZS’s clients are pharmaceutical companies.  Within this industry, ZS primarily sells sales and marketing projects.  While many people who join generalist consulting firms view this scope of work as an immediate turn off, the expertise-based approach is definitely something that helps foster talent.  Quite simply, it’s easier to be competent in what you do if you do more of the same thing over and over.  With a narrower scope, consultants are much more efficient in ramping up on new projects; you don’t necessarily have to jump on a new learning curve every time.

Coming from a generalist background, it was interesting for me to work in an environment where the majority of consultants were knowledgeable about the industry and function for a given project.  When I started in the analyst program at Deloitte, I jumped around between vastly different functions and industries.  During my three years, I ended up completing finance, IT, business intelligence, and change management projects for aerospace, retail, high-tech, and consumer goods clients.  While the ramp up for each project was extremely difficult, it didn’t matter if I had any prior knowledge because at the time, I had the ultimate clout – I could always say that I was “just an analyst.”  The problem with this justification is that it simply doesn’t fly in the post-MBA world; your bill rate is twice as much as an analyst’s and you’re expected to engage with your clients at a deeper level.

One of the interesting things about ZS is that the firm doesn’t ramp up hiring just for the sake of growth.  The firm has a set annual growth target and hires enough staff each year to reach this target, not to exceed it.  At a smaller firm, with lower headcount and fewer moving parts, it’s possible to work within set growth targets.  One of the key advantages of doing this is that it makes it much easier to maintain your hiring standards.  Since the demand from customers is essentially “set,” you’re less likely to run into situations where the demand significantly exceeds supply, which in this case is represented by consultant heads.

At larger firms, it’s much harder to predict demand.  Deloitte for example has to manage more than 25 times the headcount of ZS.  Additionally, Deloitte has a higher principal to consultant ratio and each principal is compensated based on the business they bring in.  Therefore, even if corporate headquarters has created a set growth target, the individual partners are incentivized to grow the firm as much as possible.

For these reasons, larger consulting firms run into more situations where demand exceeds supply.  While most won’t admit it, when these firms have sold projects but don’t have enough bodies to sit on them, they really have no choice but to relax their hiring standards to meet the demand.  When this happens, people slip through the cracks and the consistency of people representing your brand suffers.

Disadvantages of a Smaller Firm

While this article focuses on some of the advantages, there are clearly disadvantages to working at a smaller, more specialized firm like ZS.  The first one has to do with branding.  While the graph above clearly shows a number of exceptions, the majority of smaller, boutique consulting firms do not have much brand recognition.  Beyond just affecting your ego and how much you can brag to your friends, the brand recognition of your consulting firm will directly affect the quality of your post-consulting opportunities.  This is economically important because most consulting careers don’t last beyond two years.  McKinsey has been known to pay its consultants less than its peers because the post-consulting careers of McKinsey alumni tend to be very lucrative.

Another disadvantage is breadth.  Regardless of whether a choice is made to specialize in a particular industry or function, a smaller firm with fewer heads can only cover so many different service areas.  ZS has made the strategic decision to specialize in one industry.  However, for many people who are new to consulting and view consulting as a career path with endless opportunities, being stuck in one industry or one functional area is the worst thing in the world.

Finally, another disadvantage has to do with your chances at becoming partner.  The tradeoff of having managed growth targets is that, compared to other firms, there are fewer partner positions available.  At ZS, it’s statistically harder to receive an ownership stake in the company.  The consulting industry attracts many people with a strong desire to move up the ladder quickly, and these people would have better chances at reaching their goal within a larger firm.

When I originally made the decision to move from Deloitte to ZS, my primary consideration was the desire to try a different service area.  At Deloitte, my consulting experience was primarily focused on finance and process analysis projects; as I started my MBA, I really wanted the opportunity to work in sales and marketing.  Since I knew there were ex-Deloitte people at the firm, I went into my internship assuming my experience at ZS would just be “more of the same.”  A summer later, I now realize that there are key differences between the firms which are driven by the total number of employees.

My advice to anyone considering consulting as a career is to take the size of the firm into account when deciding between consulting companies.  Everyone’s needs and objectives from a consulting career will vary.  For me personally, the move from a big brand to a smaller boutique made sense because I already had a brand name on my resume and I wanted to narrow my scope to become an expert.  While most firms will give you the core components of the consulting experience, the differences between small and large firms are significant enough to affect how much you enjoy your experience and thus, how long your consulting career lasts.